The past belongs to everyone. We invite you to join us and enjoy studying the fascinating archaeological record of Michigan's past.

The Native American population in Michigan was never very large by today’s standards. In Rites of Conquest  Cleland says ” The earliest censuses indicate that there were about 20,000 Indians in Michigan and northern Wisconsin. Perhaps 12,000 to 15,000 were located in the southern third of the lower peninsula and the remaining 5,000 to 8,000 in the north. These are likely conservative figures and, adding in Michigan’s Potawatomi it is likely that the total count was closer to 30,000. ”  Cleland notes that the census was taken in the 1830’s but the numbers are thought to be about the same as they were at the time of first contact with Europeans.  He goes on to explain ” summer village populations seldom exceeded 350 people. Although some band villages contained as few as 50 people, probably 150 people was about average. Given that size for a typical band and an average family size of about 5 people, each band would have been composed of about 30 families.”

At the time of first European contact and throughout the historic period Indians in Michigan grew crops of corn, beans and squash to provide part of their food supply while depending on hunting and gathering for the rest. The farther north people lived the less productive and reliable these crops were. Corn grown in the north was eaten before it reached full maturity in areas where the growing season was short. Hunting and gathering, including fishing, were depended on more heavily in the north and populations were sparser because food was less available. In both the north and south people gathered together in villages during warmer weather at locations where  the food supply was sufficient to support a concentration of people. In the fall they dispersed across the land in family groups to spend the winter hunting. Families needed to be widely separated across a large area to avoid depleting the local population of game animals and having nothing left to eat. They also needed to wait a number of years before returning to the same hunting ground, allowing game animal populations time to recover from being reduced by hunting.

Cultivation of corn did not begin in Michigan until about 1200 to 1300 years ago. Before the introduction of agriculture hunting, fishing, and gathering wild plant foods had to provide the entire food supply. People still came together in group encampments at times and places where there was enough food, but the groups were probably smaller and the lengths of time shorter. These periodic gatherings were essential for maintaining social relations and arranging marriages, but the majority of time throughout most of the prehistoric period would have been spent dispersed across the land as small family groups.

This means archaeological sites where large numbers of people were present at the same time are relatively rare. Most sites are places where a small family group camped.  With population so sparse and village sites so rare, why are there so many places where large numbers of stone artifacts are found?  The great length of time people lived here is the answer.  Human occupation of Michigan is believed to have begun at least 12,000 years ago and possibly even earlier than that.  The population was always sparse and the group of people occupying a site was almost always small, but 12,000 years was enough time for an immense number of these events to accumulate.  Favorable campsites were utilized repeatedly by different groups of people living in the same geographic area but at widely separated points in time. One site in Jackson County shows clear evidence of having been occupied by at least 30 different small groups of people at different times over thousands of years. Evidence of prehistoric occupation is present on almost every piece of high ground adjacent to a lake, river, pond, wetland, stream or spring. Even farms that are far from sources of water and have no actual campsites on them have sometimes produced substantial collections of undamaged spear and arrow points that were lost during hunts and accumulated  over thousands of years.

There are lots of prehistoric sites out there, but how do you find one?  The best place to look is in farm fields. The best time is in the spring when the soil has been turned up for planting, and weathering by rain and light wind has exposed the stones. Sites occur most often on high ground adjacent to a source of water. Sandy soil was preferred for camps probably because it had less vegetation, drained well, and was easier to dig in. The most visible and easiest to recognize indicator of a campsite is fire cracked rock. During all time periods except the very earliest Paleo period, the Indians gathered fist-sized cobblestones to use in their cooking. The stones could be heated in a  fire and then dropped into a container of liquid. It was possible to boil water and cook food in a container of bark, wood, or animal skin that would not survive direct contact with fire. These stones were reused many times. Repeated heating and cooling split them apart into angular shaped pieces that look very different from other stones in the soil. The other stones were transported there by glaciers and became heavily eroded in the process. Fire cracked rock has sharp angles and rough surfaces while other stones that size have rounded edges and smooth heavily eroded surfaces. Fire cracked rock is very easy to spot once you have learned how to recognize it. Examples are shown below: 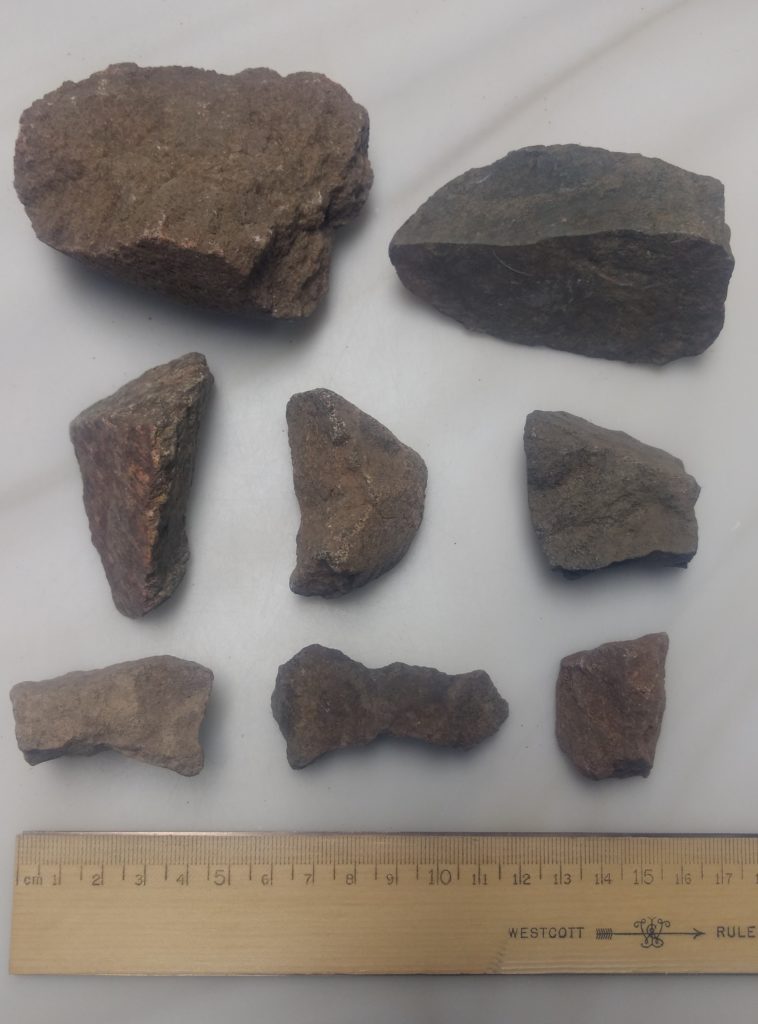 The other clear indicator of a habitation site is flint chippage.  Thin sharp flakes of various sizes are usually scattered across the same area as the fire cracked rock.  Some sites have large amounts of chippage while others have abundant fire cracked rock but very few chips.  It depends on what kind of activity took place while people camped there.

Fragments of pottery, called pottery sherds, are sometimes found on sites but they are fragile and tend to disintegrate rapidly when exposed to weathering.  When sites were first cleared of trees and plowed in the 1800’s large amounts of pottery were probably brought to the surface.  Today when sites located in soil that has never been plowed are excavated they often produce large numbers of pottery sherds.

Another frequent find is worn out scraping tools, sometimes called ‘thumbnail scrapers’ because of their similarity in shape and size to a human thumbnail. These were employed primarily for scraping animal skins. They were inserted into a handle during use and started out 2 or 3 inches long when first made but were repeatedly resharpened until they became too short to use, then discarded. The discarded scrapers are usually about an inch or less in length,

Many other types of stone artifacts occur on campsites and will be covered in a separate guide called How to Recognize Stone Artifacts.

Be sure to obtain permission from the landowner before entering private property.

In archaeology, as in all fields of science, the prevailing ideas and conceptual models are continually being challenged by new research.  They evolve and improve as new research results and data are incorporated. Data from a small number of excavated Michigan sites suggests that crops other than corn may have been grown 1,000 years or more before the arrival of corn.  Remains of seed producing plants such as sunflower, sumpweed, chenopod, Amaranth, maygrass, knotweed, smartweed and giant ragweed have been found on sites in eastern North America in contexts that indicate they were grown as crops long before the introduction of corn. Some of these plant species may have been grown by people in Michigan and are, in fact, present here today as weeds. Crops grown at these early dates would probably have been planted in the spring and left to grow unattended during the summer, with people returning in the fall to harvest them.  Villages would not be occupied all summer to protect the crops as was necessary with corn, a favorite food of deer and raccoons.  The seeds from most of these plants are very small and require a lot of work to produce a relatively small amount of food. People utilizing these plants would most likely still need to obtain the vast majority of their food by hunting and gathering. This is a very interesting area of research and future excavations in Michigan will help determine if and when these plants came into use and how important (or unimportant) they were as a food source.